Click here to listen to Concert 2 organists talk about the organ.

Organists and Organs to be featured on April 16: 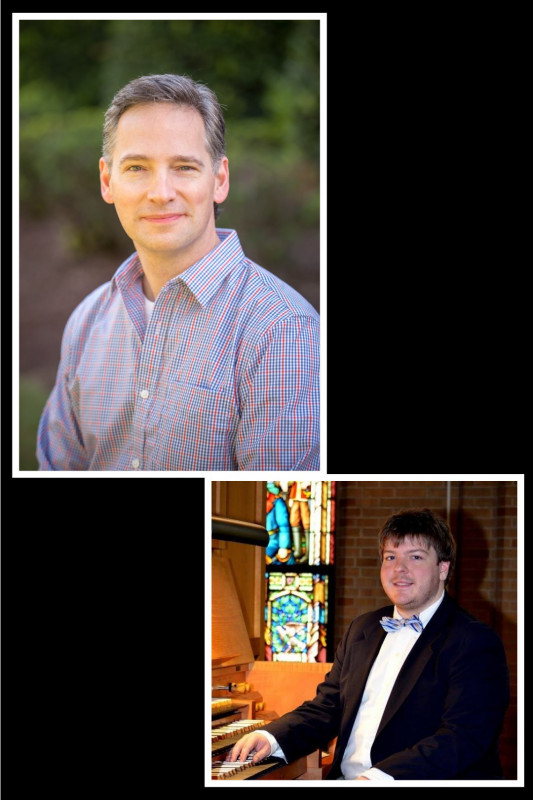 William Allred studied organ at Westminster Choir College with Donald MacDonald and at Indiana University with Larry Smith. He received his doctorate in choral conducting from the University of North Carolina at Greensboro. Locally, Johnny Bradburn, Bobby King, and André Lash were his teachers. Allred directs the Burlington Boys Choir, is the Organist-Choir Director at Guilford Park Presbyterian in Greensboro, a past Dean of the local Chapter of the American Guild of Organists, and volunteers at Friends Homes Guilford, directing the Resident’s Handbell Choir.

Andrew O’Connor holds a Bachelor of Music in Organ Performance from The University of North Carolina at Greensboro and looks forward to pursuing the Master of Music in Choral Conducting within a few years. Currently, Mr. O’Connor is the Organist and Director of Music at Our Lady of Grace Catholic Church where he plays the wonderful Detlef Kleuker organ around the clock. The music program at Our Lady of Grace has grown steadily under Mr. O’Connor’s direction. Andrew served as organist at OLG during his high school days and was pleased to return full time at the culmination of his degree in 2012. GreensboroAs an organist, in addition to playing the great masterworks, Andrew enjoys improvising on the Gregorian Chant Propers of the Mass. As a composer, Mr. O’Connor enjoys composing psalms used in the Liturgy, and composing settings of the Mass Ordinary. Equally comfortable in performance, Andrew is well known in churches throughout the Diocese of Charlotte and as an accompanist in the Greensboro area. Andrew has played organ dedication recitals in the area, including the Johannus American Classic organ at St. Andrew’s Episcopal Church right here in Greensboro.